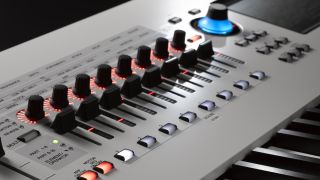 Over the past four years, Yamaha’s Montage synth has established itself as a firm favourite among performers and producers around the world. With its powerful sound engine and versatile, flexible controls, it’s the perfect all-in-one instrument for the studio and stage.

However, not content to rest on its considerable laurels, Yamaha is rebooting both the MONTAGE and MODX - the MONTAGE’s little brother - with significant OS updates. What’s more, the MONTAGE is now available in a striking and sophisticated white finish.

MONTAGE OS 3.0 arrives alongside MODX OS 2.0, and the biggest news is that both synths are getting an all-new pattern sequencer. This enables you to create, edit and save patterns of up to 16 tracks in 128 slots, and you also have the option to convert completed pattern chains into songs. As such, it’s easier than ever to use MONTAGE and MODX as end-to-end music production platforms; there’s no need to look anywhere else for anything.

There’s more, too: MONTAGE OS 3.0 and MODX OS 2.0 include new audio effects, such as Mini Filter and Mini Booster. Based on classic analogue synth circuits, these have been created using Yamaha’s Virtual Circuitry Modelling technology (VCM).

Other new processing tools include Wave Folder, a delicious distortion that enables you to twist and refine your sounds, and a new, more creative LFO.

Elsewhere, MONTAGE and MODX owners can also benefit from a hybrid MIDI connectivity function, a streamlined workflow and an expanded sound library with new performances.

Two of the best workstation synths on the market, then, just got even better. Find out more on the Yamaha Synth website.