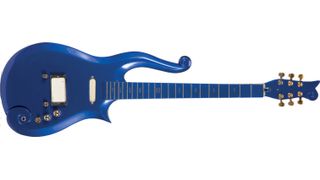 It turns out Kurt Cobain's Nirvana MTV Unplugged Martin isn't the only headline-grabbing guitar going up for auction at Julien's in Beverly Hills next month (June). One of most desirable guitars Prince ever owned is also for sale.

But even the auction house reportedly didn't even realise just how significant the 1984 Cloud design was at first.

5 things guitarists can learn from Prince

When the auction house first announced that the guitar was up for auction it was simply listed as “a custom-made 1984 blue Cloud guitar used by Prince” but its significance is now clear.

Cloud guitar expert John Woodland called the auction house after seeing the initial listing; he suspected it was one of the first Cloud four Cloud guitars ever made for Prince and this was the fabled Blue Angel.

He later authenticated it with the help of a CT scan organised by Julien's.

Julien's has declined to say where exactly the guitar has been for all these years, except for stating it's been in a private collection since the '90s and gifted by Prince to the current owner.

“In a sea of Clouds — because there are a lot of them — the thing that brings a collectible guitar the most value is how much mojo it has,” Laura Woolley, consulting specialist for Julien’s, told Rolling Stone.

“Prince came into the collective consciousness in the eighties and this was one of his primary performance guitars at that time. So it’s got a lot of mojo.”

The original Cloud design has been the source of dispute between the Prince Estate and luthier Dave Rusan.

The creators of the Blue Angel guitar are listed as O’Hagan Guitar Company, luthiers Tommy Stinson (not the Replacements bassist of the same name), Dave Rusan and Barry Haugen — plus painter Mark Sampson.

Luthier Andy Beech has also created models since the late eighties, with some selling at auction. The Prince Estate also sells production models made by Schecter, but the initial four Clouds are significant and used by Prince during the '80s.

According to the auction house, the Blue Angel was played by the Purple One during his 1984/'85 Purple Rain tour and on The Arsenio Hall Show, MTV, Saturday Night Live and in music videos.

“It’s the most significant Prince guitar that’ll ever come up for auction,” auction house founder and president Darren Julien adds.

To view the auction catalogue for the guitar visit Juliensauctions.com