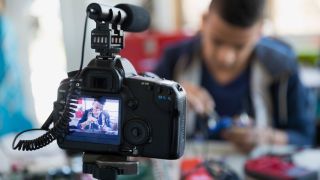 The days when drummers had to cram their gear in the back of a van and slog around the club circuit to scrape out a living can seem like a relic from some lost civilisation in the age of the modern online drumming star.

Why endure the indignity of sleeping in a van when you reach millions of drummers without leaving the comfort of your own home? Our five finalists demonstrate that there’s more to becoming an online drum star than showing off your slickest chops if you know how to restore gear, build a studio, or teach a technique.

rDavidR’s Youtube channel is dedicated to drummers with a DIY spirit. This year, he’s posted videos where he’s restored drums suffering from neglect, rewrapped a vintage Tama kit, built his own studio desk and crafted a cymbal storage unit. It’s practical, hands-on stuff that distinguishes him from the chops-busting pack.

Based in Arizona, Holland spent four years with metalcore band The Word Alive before switching his focus to online drumming fulltime. Holland boasts over 90 million views on his Youtube channel and 2019 saw Holland undertake a hugely successful clinic tour throughout Asia, breaking attendance records in Malaysia and Thailand.

Educator Mike Johnston is the owner of The Drum Lab in Sacramento, California, and host of mikeslessons.com where he covers everything from rudiments to Afro-Cuban beats and linear grooves in his online video lessons. He has 157,000 subscribers on Youtube where many of his videos attract over one million views.

Ben and Cody’s Youtube channel is all about coaxing the sound you want out of your drum set. Over the last twelve months, they’ve gone into admirable detail on topics as varied as gaffer tape hacks, using felt strips for bass drum muffling, and a veritable world of tuning ideas.

Australian Stan Bicknell balances his devotion to drumming with running a coffee business, but the rhythmic side of his life has won him 161,000 Instagram followers, a Remo endorsement, and his own course on Drumeo to explain how he achieves such impressive speed playing a single kick bass drum pedal.