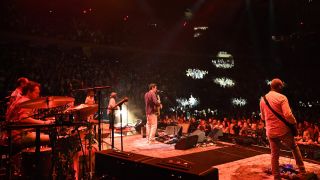 The challenges are many for anyone who steps into the arena of live session work. These drummers are often charged with taking tracks created in the studio – often without a drummer even in the room – and translating them for live performance, from interpreting the parts to choosing the right sounds.

As this year’s selections demonstrate, the top live session players are musical chameleons, able to adapt to survive and thrive in any musical environment, from playing R&B with the biggest names in pop music, to jazz gigs, TV appearances, and one of the world’s most successful tours of all time.

2019 brought Steve Jordan back behind the drums for guitarist and singer John Mayer for a marathon tour covering Europe and the US. When keeping that pocket with his inimitable feel, Jordan was one of the players and writers on Sheryl Crow’s swansong album Threads. A man of many talents!

The drummer who once slammed out thrash and punk with Suicidal Tendencies has been on the road this year with Italian star Eros Ramazzotti, taking him from Europe to Russia and Israel before they head to South America in 2020. Moore’s pocket, chops and power shine through his every performance.

Long been hailed as a torchbearer for gospel chops, Aaron Spears needed his slickest grooves and endurance aplenty for Ariana Grande’s Sweetener World Tour, playing massive set lists of up to twenty-nine songs every night. Somehow, he had enough energy left to play with Backstreet Boys on their comeback too!

2019 was one for the history books for Mark Schulman who played drums for Pink on her Beautiful Trauma World Tour which took just under US$400 million, making it one of the highest grossing tours of all time. Off the road, he’s a motivational speaker talking about achieving peak performance.

As the live drummer for Billie Eilish, Andrew Marshall has been keeping the beat behind the singer during a rise to stardom best described as meteoric. Charged with the responsibility to bring Eilish’s programmed studio beats to life, Marshall stands out as a torchbearer for the possibilities of hybrid drumming.

When he’s not been busy backing up crooner Josh Groban, Kaz Rodriguez spent the year playing clinics as far afield as China, jamming with Aaron Spears on his own song ‘7 To The Power Of 6’, and covering for his pal Pete Ray Biggin on a gig with Kamaal Williams.

Not many drummers can cover everything from rocking the Chuck Berry catalogue with Ronnie Wood to grooving with Robert Glasper and Derrick Hodge at Ronnie Scott’s, but that’s testament to the versatility of Dexter Hercules. 2019 has seen the London drummer step into the spotlight leading his own band too!

Talk about high pressure performances – Venzella Joy is the first face onscreen and the first musician to play – unaccompanied no less – in Beyoncé’s Homecoming concert movie. When she’s not drumming for Beyoncé, Joy has been the guest drummer on Late Night With Seth Meyers and released her own original music.

Laying down the dancefloor-filling grooves for the Princess of Pop, Tom Meadows spent his summer backing Kylie Minogue on a tour that included a sun-drenched Sunday afternoon Glastonbury slot and two dates at Hampton Court Palace. Then he hit the road with Will Young for the singer’s new Lexicon album.