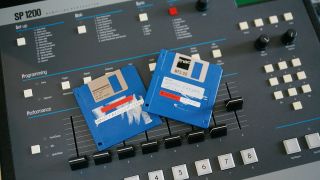 The vast majority of producers making use of samples today do so in software. Replaying, processing and manipulating recorded sounds is so easy in modern DAWs that we take it for granted – but this certainly wasn’t always the case.

In fact, software sampling is quite a recent development in the bigger picture of music making. Until as recently as the late '90s, if you wanted to use a sample in a track then you’d probably have done it with a hardware sampler.

The history of sampling as we now know it only really stretches back to the 1970s, when the development of digital audio technology meant that, for the first time, sounds could be recorded and played back with a new level of accuracy and unparalleled processing potential. However, these early samplers were expensive, and so generally only accessible to the ultra-rich.

It was only in the 80s that the technology became commercially viable, with hardware samplers gradually dropping in price and increasing in power up to their '90s heyday.

Come the late '90s and early 2000s, the writing was on the wall for hardware samplers as software options finally began to mature, and DAWs offered previously unseen levels of sample processing power.

Those early samplers have secured their place in musical history, though, with some models still being lusted after today. Here, we celebrate the four samplers that changed musical history.

A handful of sampling computers were built during the 1970s, but these devices – among them the EMS MUSYS system, Computer Music Melodian and Synclavier – tended either to be incredibly expensive, incredibly rare, or both.

The Fairlight CMI is widely considered to be the first (relatively) affordable commercially available sampler. Even so, it cost around $25,000 when it went on sale in 1979, the equivalent of about $77,000 in today’s money.

The CMI isn’t just a sampler but a full computer-based instrument with sequencing and synthesis features. It was incredibly advanced for its time, but its price meant it was only really used by the most wealthy musicians of the day. Artists including Stevie Wonder, Kate Bush and Jean-Michel Jarre were early adopters, expanding their sonic palettes with digital sounds as soon as the Fairlight came on the scene.

In reality, the Fairlight was quite a limited device by modern standards, but at the time, its power was astonishing. Even the ability to record a sound and play it back immediately at a different pitch was shockingly exciting in the early days of sampling hardware. Check out this great clip of jazz legend Herbie Hancock on Sesame Street demonstrating his Fairlight to a group of delighted kids.

If you want to try out Fairlight sounds today, a plugin emulation such as UVI’s Darklight IIx or Arturia’s CMI V is probably the easiest option.

Slightly more affordable samplers arrived in the early '80s, most notably in the form of the Emulator series introduced in 1981 by the Californian E-MU Systems.

Affordable is really a relative term in this case, seeing as the first generation Emulator still cost around $10,000 on release (the equivalent of around $28,000 in today’s money).

Even so, the Emulator was a lot cheaper and more user-friendly than the Fairlight and went on to shape the music of the early '80s, being used extensively by bands such as Depeche Mode, New Order and Genesis.

The Emulator was an 8-bit device and sounded quite unrealistic by modern standards, but its combination of sampling, filtering and sequencing proved popular from the word go. Around 500 units were sold before the introduction of the improved Emulator II in 1984. Further models in the Emulator range remained on sale until 2002.

Its little brother, the SP-12, and its successor the SP-1200, were based on a similar concept but simplified things for use as a dedicated drum sampler. Ditching the Emulator’s keyboard in favour of push buttons derived from the company’s Drumulator digital drum machine, the SP-12’s low-res 12-bit/26kHz sampling engine allowed for just 1.2 seconds of sampling time (later SP-12 Turbo models expanded the sample memory to a whopping 5 seconds!).

In practice, the SP-12 and SP-1200 were also used for melodic sounds by most producers and helped define the sound of '80s and '90s hip-hop thanks to exponents including Pete Rock, Marley Marl and the Beastie Boys.

Crunchy and low-res by modern standards, software emulations aren’t easily available, but UVI’s Emulation II is a solid plugin based on the classic Emulator II unit, while NI’s Maschine features an SP-inspired mode which does a reasonable impression.

The longest-running sampler range is that of Akai, whose MPC series debuted in 1988 and continues today.

The original MPC60 was designed by digital drum machine pioneer Roger Linn and built on his efforts with the Linn LM-1 and LinnDrum. Combining sequencing and sampling features in a single box with a distinctive 4x4 grid of touch-sensitive pads, that first unit - the MPC60 - was more powerful than the rival SP-1200.

The current MPC range is a hybrid affair, with the MPC software coexisting as a plugin and as the platform for standalone hardware devices. There’s also a mobile version, iMPC.

Few companies persevered with hardware samplers after the introduction of powerful software options in the early 2000s. The market for expensive standalone sampler boxes seemingly disappeared overnight - at least until Elektron released the Octatrack in 2011.

The Octatrack tore up the rulebook. It’s a deliberately complex and multi-faceted piece of kit, requiring serious investment of time to get to grips with its potential. Unlike most other hardware sequencers, it also prioritises live performance and sound mangling above all else.

A lot of people find it hard to get into the Octatrack’s complex and multi-layered workflow, which is a perfectly legitimate complaint: this is by no means a simple instrument. You can scratch the surface of the features and understand how it works within hours, but you won’t get the most out of it without truly studying the manual and exploring the deeper functionality.

Those who put in the effort got a fantastic instrument just as capable of reworking loops and hits in the studio as being the centrepiece of a live setup.

Elektron updated the model to the Octatrack MKII in late 2017. It wasn’t a radical overhaul so much as a refresh. Aside from a new look and upgraded components, the most notable difference was a smattering of dedicated buttons, helping smooth out and speed up the workflow.

The Octatrack remains one of the best choices for dedicated hardware sampling. Such is its unique approach that it’s hard to name a software alternative. Similar things can be achieved using DAWs and plugins, but the focused approach of the Octatrack is hard to replicate.