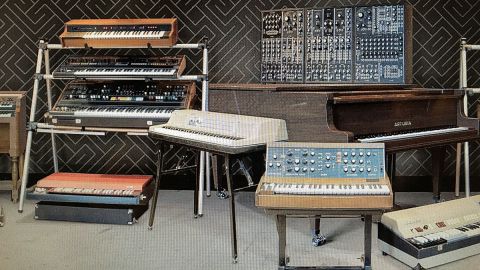 Even before the addition of four new units, this was a fantastic collection of classic keyboards and plentiful presets. At £16 per instrument, it also represents excellent value for money.

It’s over 16 years since Arturia unleashed its first product on a burgeoning commercial software synthesis scene.

Storm was a self-contained music creation environment that laid the groundwork for their products to come. However, a lot has changed in that time, and Arturia now finds itself producing software-emulations of classic keyboards as well as its own, ever-expanding, range of hardware.

Whilst the V Collection was once a convenient and cheaper way to get hold of Arturia’s various electronic and electrical keyboard emulations, it’s now the primary vehicle for them to unleash new models. One omission last time around was the dropping of Spark (a software drum module with optional hardware controller), and V Collection 6 maintains this focus on keyboard-based kit.

The total instrument count now comes to 21 - not including Piano V’s 12 different models accessible from within. The four new additions are an interesting mix of instruments that take in the full gamut of analogue, digital and electro-acoustic methods of sound generation.

The Buchla Easel V is a software version of Don Buchla’s Music Easel, a suitcase analogue synth from 1973 (though back in production since 2012, at nearly £5k certainly not a casual purchase). Although the included presets are fun and engaging, the power of this synth lies in its ability to conjure-up all manner of unexpected sonic weirdness. This does however require some patience, as Buchla synths don’t follow the more commercially-orientated architecture established by Moog and others.

Once you do hit a sweet spot though, the results are quite unlike other synths in this collection. The Buchla Easel V is great for creating beautiful evolving ambient backdrops, menacing textures and wild repeating melodic patterns. The emulation of the built-in spring reverb is very good and adds a distinctive vintage vibe to anything you run through it.

The Hohner Clavinet was originally intended as a modern, electric version of the clavichord (which itself was smaller and quieter version of the harpsichord). Despite the first model - which featured a built-in amp and speaker - being less than successful, the Clavinet went on to become one of the essential keyboards of the 1970s (particularly, though not exclusively, in the realms of full-on funk). Arturia’s Clavinet V makes use of physical modelling, rather than samples, and allows the inclusion of advanced editing controls to tweak the physical characteristics of the keyboard.

One of the advantages of software is that it is relatively easy to add features to an existing product, and Arturia have taken this opportunity to include two new modulation sources. ‘Left Hand’ utilises five modulation sources that can each be routed to any of the Easel’s 76 modulation targets, whilst ‘Gravity’ uses the interaction of objects placed in a 2D space to create irregular modulation possibilities. If this isn’t all enough to get your head around, there’s a built-in sequencer and effect section. Deep and powerful.

Also included is DX7 V, an emulation of Yamaha’s legendary and groundbreaking, synth from 1983. Although there are many soft synths that employ FM (Frequency Modulation) as their core sound generation method, this is the first to appear with the DX name. As an owner of an original DX7 (Mk1), we were keen to see if Arturia had captured the sound of the synth engine and output stage. The simple answer is yes.

We compared the original ROM patches against those running on our computer and they sounded almost indistinguishable. All the noise and expected artefacts were there (though there is an option to switch to a higher DAC resolution if this all sounds like low-grade obsessive nonsense). Beyond emulating the DX7, there are a host of upgrades that help enhance the sonic possibilities of the original and make programming easier. The animated envelopes, in particular, are a real aid to sound creation. If only they’d been available in 1983!

Next in the newbie list is CMI V, which is loosely based on Fairlight’s massively expensive ‘Computer Musical Instrument’ systems. Combining software processing, custom digital playback hardware and analogue filters, these cutting-edge units found commercial fame when used for sampling - though they  have many limitations compared to today’s technology. However, they were also capable of additive synthesis and resynthesis as well as composition/sequencing. An expensive pioneer

The Fairlight CMI was actually a collection of customisable systems. Using the combination of a computer front-end and bespoke digital audio hardware, the CMI that Arturia’s software is most influenced by is 1982’s Series II. Massively limited by today’s standards, it featured eight-voice playback, with sounds coming from short samples, or generated internally (using 32-harmonic additive synthesis or direct drawing of waveforms with a light-pen). An important aspect of ‘the Fairlight sound’ is the limited bit-depth and sampling rate of its ADC/DAC stages running through analogue filters.

The final addition to the package is the Clavinet V, which aims to convey some of the magic of this string-based keyboard known for its extreme funkiness (particularly when combined with the right amount of saturation and wah pedal wiggling).

There are 20 distinct instruments within this collection, with the 21st slot being taken by Analog Lab 3. This is the latest version of Arturia’s catch-all instrument player, that takes thousands of presents from the full range of instruments and makes them available in one place. The browser makes it very easy to search for sounds, and basic editing is provided should a little finessing be required. For those who just want a large library of sounds, this product could be an alternative to buying the full V Collection. It also offers direct access to the Arturia Sound Store for purchasing additional preset banks. However, we would urge anyone to try and stump-up the additional cash for the full package, as Analog Lab allows you access full editing controls for those products you own.

In recent years Arturia has made significant strides in unifying and improving the visual aspect of its plugins. The resizable GUIs do make a difference to usability - even if using smaller zoom levels is problematic at times. The instruments themselves also feel more stable than in the past. Overall, this is a solid update to a great package.