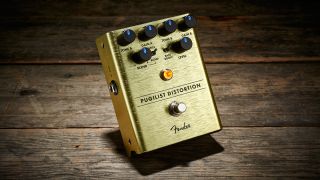 Distortion is at the heart of hard rock and metal. It's always been the essential ingredient for roaring riffs, wailing solos and the entire metal genre. So, unsurprisingly, there are a ton of options for getting the best distortion sound from your rig.

As opposed to overdrives, distortion pedals are more commonly used with clean amps, with all the gain coming from the stomper itself.

Perhaps the most iconic example of a guitarist stepping on a distortion stompbox is when Kurt Cobain slams his foot down on his Boss DS-1 in the intro to Nirvana’s Smells Like Teen Spirit, but you’ll hear distortion - whether from a pedal or an amp - on most heavy music.

Distortion’s hard clipping yields a more extreme sound with bigger gain ranges. That means the sound is more compressed, too, which results in increased sustain and feedback, something guitarists such as Jimi Hendrix and Joe Satriani manipulate to great effect at loud volumes.

An increasing number of distortion units now feature three-band EQs, offering increased control over your tone and essentially acting as an additional channel for your amp. These pedals are great for getting killer gained-up tones at low volumes, too, something you might struggle to do even with low-wattage valve amps.

So, how to pick the best distortion pedal for you? Among our distortion picks, you'll find multi-channel offerings, blendable drives and amp-inspired circuits at a variety of price points.

An affordable dirt box with a three-band EQ

With everything set to 12 o'clock, the Super Badass's basic voicing is tight and crunchy - firmly in the British distortion camp. There's a huge range of output on offer, too - unity volume lies at around 10 o'clock. The gain range is similarly impressive: three-quarters on the distortion knob yields a thick, chunky growl that will satisfy most genres of rock players. You can also employ the three-band EQ to up the mids for vintage bite or cut 'em for metal thrills, all with impressive touch sensitivity and low noise levels.

One of the best - and first - distortion pedals ever

Back in 1978, effects giant Boss was first making its name, and the DS-1 was one of only a handful of pedals bearing the company's brightly coloured compact enclosures. But it wasn't long after its launch in 1978 that it began luring in legendary guitarists, including Joe Satriani, Steve Vai, and later, Kurt Cobain. The pedal's saturated tone, hard clipping and touch responsiveness attracted big-name players - while the rest of us loved the low price tag, which remains to this day.

In praise of: Boss DS-1 Distortion

Colossal high-gain tones from a US amp legend

This wide-ranging dirt box from the legendary amp maker packs a five-band EQ, plus a host more flexibility: the hi/lo footswitch toggles between more and less gain, with volume knobs for each mode; the boost switch - for extra low-end and dirt - is easily accessible, and you can also deactivate the EQ on the hi or lo modes. With a saturated, yet responsive chunk, the hi mode puts Foo Fighters, Metallica and Dream Theater at your feet, thanks to the extra EQ, which sparkles and scoops without any harshness. But while you won't find transparent break-up tones on the lo mode, its harmonically rich overdrive cleans up beautifully with the guitar's volume knob.

The number one pick for scuzzy fuzzstortion

The Pro Co Rat remains one of the most popular distortion pedals ever to grace guitarists’ ’boards. Its trademark hard clipping comes from a pair of silicon diodes, which yield an aggressive yet smooth distortion, all with a hint of fuzz. That distinctive tone led to players as diverse as Dave Grohl, Thom Yorke and James Hetfield all making good use of the rodent over the years. This second version was released in 1988, and although the ’85 Whiteface RAT Reissue utilises the original’s LM308 op amp and therefore captures the holy grail of Rat tones, the Rat 2 gets close on a budget.

View at Thomann
Check Plugin Boutique
Check Andertons
See all prices (4 found)
Defined, tight high-gain sounds
Built-in noise suppression works well
Useful EQ controls
Low-gain sounds are nothing to write home about… But that's not what this pedal is for!

Kirk Hammett's signature distortion pedal is a brutal-sounding thing, with a raging stack-esque delivery. Background noise is kept to a minimum with an onboard noise gate, but the big selling point is the Doom knob, which dials in a monstrous landslide of bottom-end for that crushing tone that Kirk’s bandmate James Hetfield is renowned for. The Hi/Lo switch adds to the tweakability with the Lo setting upping the grunt factor for rhythm and Hi boosting the top-end and sustain for lead breaks. We also love the treble control, which has bags of variation. To have all this power in one reasonably affordable pedal is a dream come true for metalheads.

The Wampler Sovereign is a total distortion pedal that's not designed to emulate a particular amp, but to dish the dirt in a variety of flavours. The Advanced Gain Structure section changes the character of the distortion via a gain knob, a boost switch is present for even more gain, and a Bright/Even switch lets you set your tonal preference. On top of that you have the tone and Mid Behaviour knobs, respectively dialling in the highs and focusing on the area of the midrange that you want to emphasise, so you can, for example, dial in a real in-your-face upper midrange presence that cuts right through. It's these tonal options that set the Sovereign apart.

View at Thomann
View at Andertons
Check Plugin Boutique
See all prices (5 found)
Huge British distortion sounds
Near-unlimited gain
Great value given the tones on offer
Could be overgained for some!

The BE-OD pairs down Friedman’s Marshall-inspired BE-100 amp to pedal form.  Control-wise, it’s similar to a fully fledged preamp, and there’s an internal gain trim pot, too. This is a cracking all-round distortion. Its defined bite and increased output is very noticeable and the tight control does exactly that - removing flab - and the BE impressively retains its character across the gain spectrum.

The Pugilist offers dual gain engines (A and B) linked to a blend knob so you can have 100 percent A or B or a mix of both. This is a brilliant feature as there’s a wide variation of tone available from blending the two channels especially as each has its own adjustable gain and tone. Channel A offers a slightly milder distortion than B so you can use a touch of A with brightened tone to add clarity and pick attack to the saturated sound of B or have a mixture of both reminiscent of playing through two amps. You can also choose to run the two engines in series where full-on high-gain sound with rich harmonics is pretty much guaranteed.

One of the best distortion pedals for old-school drive tones

This filthy beast secretes thick, LM308-driven, '70s-style distortion that works great for old Sabbath riffs. There's more good news thanks to a toggle switch that flicks between a trio of clipping diodes to offer different distortion tones. Experiment with the toggle, distortion and tone controls and you'll find glam riff-fuel such as T-Rex and Bowie, and a cracking stab at the Stooges' I Wanna Be Your Dog proto-punk sound. It's addictive, versatile and just plain fun.

One of the best metal distortion pedals, from the designer of the 5150

Amptweaker is the brainchild of James Brown, the lead engineer on the Peavey 5150. With that heritage, you might be forgiven for having high expectations - and Amptweaker delivers. Compared with the original TightMetal, the Jr has a much better noise gate, lower noise floor and additional EQ options that allow it to take on some of the tonality of its FatMetal pedal. Convincing chug and powerful arpeggiated chords are easy to find with a Les Paul and a Jazzmaster. With the tight switch engaged, the pedal will even djent. With a seven-string in hand, you can smash out Tesseract without a mushy bass.