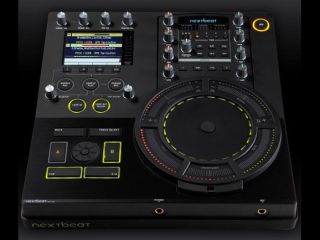 Wacom is best known for its range of pen tablets, which some musicians have taken to using as their primary input device. The company is now seeking to extend its reach into the digital tune-crafting realm with the launch of the nextbeat NXT-1000 controller.

Based on "newly-developed sensitive touch detection technology", this is a standalone device that's said to feature two music players, a mixer, effects and a sampler.

As such, it appears to be designed very much as one-stop DJing solution - finger pressure and movements can be read and used to operate the system, and there are knobs, buttons and a screen, too.

What's more, the central control unit can be removed from the main base, enabling you to use the nextbeat while you're prancing about the stage.

This is about as much as we know at the moment but the product website (which will launch on 18 March) should reveal more, and the nextbeat will be shown at the Frankfurt Musikmesse from 1 to 4 April.