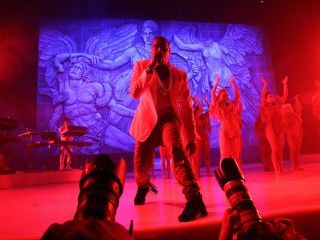 UPDATE: It would be unfair of us to report on Kanye's onstage rants and not mention his music. So it's worth adding that the rapper's collaborative album with Jay-Z, Watch The Throne, has finally been released this morning. Stream it here - it's sounding good to us on first listen.

ORIGINAL STORY: MusicRadar was lucky enough to be at the Big Chill festival 2011 on 6-7 August to witness some great performances from Robert Plant & The Band Of Joy and Rodrigo y Gabriela amongst others but one man certainly captured the headlines: Kanye West.

Taking to the stage half an hour late and struggling with a hoarse voice throughout, West's performance was as hit-packed and overblown as you might expect, although his set drew mixed responses from the crowd.

Just when we thought it couldn't get any more Spinal Tap, the hip-hop star broke off into a meandering seven minute rant that drew a mixture of boos and cheers, and saw fans leave the field in droves.

Is Kanye West a perfectionist or deluded egotist? Check out the video and let us know what you think.