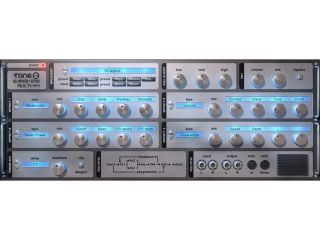 Tone2 has even included a routing diagram, which is handy.

Tone2 is following up its Gladiator synth with the release of a multi-effects plug-in called Warmverb Multi-FX.

With a name like that, you'd expect to find a reverb in there somewhere, and indeed there is. This is based on the technology that's used to power Gladiator's reverb, though Warmverb benefits from an 'ultra' version of it. Presumably, this will result in a better sound.

There are in fact three reverbs in all, while the other effects include a vocoder, delay, chorus, phaser, filter, talkbox, tubeamp, bitcrusher and ring modulator. The list really does go on and on.

Modular in design and sporting what Tone2 believes is an easy-to-use interface, Warmverb Multi-FX comes with 150 factory presets and costs $79/€59. It's available now as a PC VST plug-in - a Mac VST/AU version will be out soon.

Full specs and a demo are available on the Tone2 website.