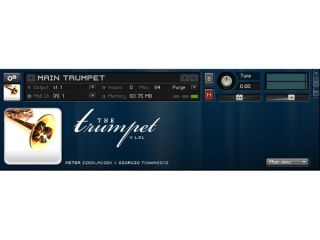 The Trumpet's interface is certainly simple.

Brass instruments are notoriously hard to emulate in software, but SampleModeling thinks that it´s hit on a winning formula with The Trumpet. A Kontakt 2 Player-based instrument, this is built around a 300MB sample library.

There are actually seven instruments in the new package: three Bb trumpets, a cornet, a flugelhorn and German and piccolo trumpets. Several mute options are available for the Bb models, while you can recreate the sound of prohibition-era Chicago with the two plungers that can be used to craft wah-wah effects.

Additional realism and expressiveness is said to be provided by SampleModeling´s Adaptive Model, which promises to minimise the differences between real phrases and those played by the virtual instrument. There´s also real-time construction of articulations - again, this should aid realism - and The Trumpet can be tweaked with just a few controls.

Available as a download, The Trumpet runs standalone or as a VST, DX, RTAS or AU plug-in for Mac and PC. It costs €149 plus VAT (if applicable) and a backup CD can be purchased for a further €12.50.

Orders can be placed on the Samplemodeling website, where you´ll also find more information and audio/video demos.