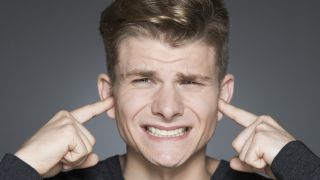 This isn't what you want to see when you play someone your music. (Image credit: Robert Recker/Corbis)

Even if you follow all the Music Production Rules to the letter, there's no guarantee that you'll have a great-sounding track on your hands. However, if you succumb to one or more of the same 10 production mistakes that every other producer on the planet makes on a daily basis, you'll almost certainly have a problem.

Of course, the first step on the road to ensuring that you don't fall into these technical traps is to be aware of them, which is why we've drawn up a list of the top 10 production faux pax...

Using Ableton Live's Beats warping mode to timestretch musical material isn't technically a crime, but if it was, it'd sit somewhere between arson and human trafficking in terms of severity. Beats mode works fantastically well at preserving the transients of rhythmic loops, but can turn musical material into a choppy mess, ruining many otherwise decent tunes.

The most irritating thing about this phenomena is that fixing it takes mere seconds: simply select a more suitable mode like Complex Pro for results that won't upset everyone quite as much.

Most DAWs offer a variety of timestretching algorithms, and it's worth giving them all a go to find out their particular strengths and weaknesses.

The loudness war is over, and guess what, audiophiles: no one cares about dynamics! Who needs them when you're blasting trap from an iPhone 5 on the back of a suburban bus? So, feel free to smash the living hell out of your master bus with a limiter - just make sure you don't start to introduce audible distortion.

It can be hard to discern distortion on smaller speakers, so err on the side of caution if you suspect you're running a little hot, and check your mixes on both headphones and monitors if possible.

There aren't many of us who can honestly say that they've never sampled a YouTube video. It's rife, and if you're merely nabbing a cheeky snatch of vocals or an exotic sound, it's perfectly justifiable.

Consider this depressing thought, though: nowadays, there are people producing who have never bought a CD. They're listening to music on phones and laptops, and lossless audio isn't just old-fashioned to them - they probably don't even know it exists. So they're sampling everything from YouTube, including sounds with... transients. Of course it's horrific, but can you blame them?

Well, yes is the answer, because 24-bit WAV samples are available from tons of places, including more than 50,000 free ones here!

If you're not a music theory genius with golden ears, tuning and layering samples can be tricky. But that's not your listeners' problem, is it?

Here's a great tip for learning this stuff, though: simply spend years and years practising, using trial and error to slowly acquire a barely adequate degree of competence. Computer Music magazine has a pair of handy analysis plugins to aid your ears: Vengeance-Sound Scope and Photosounder Spiral CM.

Another related issue is untuned drum sounds, which aren't as immediately off-putting as clashing musical material, but can prevent a track from sounding as polished and impactful as it otherwise might.

It's arguable that this is an artistic rather than technical issue, but make no mistake: if you've got too much going on in your track it's almost certain to sound messy rather than well-produced.

Your smartphone-toting, bus-based audience isn't going to be able to hear all those little details - they're probably too busy discarding whipped cream chargers to care anyway - so you might as well leave them out and save yourself a bit of headroom for getting that ultra-loud, bus-filling mix.

One might reasonably assume that vocals might be mixed like other track elements, but they're a special case, and may need to peak above other elements to be intelligible in the mix.

Sidechain compression with input from the kick and snare can help you make the vocal louder without losing the track's dynamic impact, but too much will make the vocal even harder to decipher.

Another bonus of well mixed vocals is that you're less likely to end up on a 'hilarious' misheard lyrics website.

In the words of skinny-shaming body fascist Meghan Trainor, it's "all about that bass". But unfortunately, mixing bass can be tricky, especially if you're using speakers without great low-end response or working in a smaller room.

Flabby, messy bass is a tell-tale sign of an amateur mix, so it's worth checking your mixes on as decent headphones as you can muster to ensure that you're not going to encounter any surprises in the low end when you play back your mix on another system. Using EQ and sidechain compression can give both your kick and bass room to breathe in the mix.

There's nothing quite as painful to the human ear as piercing high frequencies and, unlike the slightly more forgiving analogue domain, your DAW will recreate harsh harmonics perfectly.

One useful way to test for these unwanted, ear-shredding frequencies is to use a spectral analyser plugin such as Voxengo's excellent freeware SPAN, and you can also try listening listen to your mixdown through a phone or laptop speaker, as these will usually exaggerate excessive high end.

As a last resort, simply wrap your head in a towel and hope no one notices your unconventional fashion choice and unruly tops.

Back when stereo reproduction was new and exciting, producers would make some quite startling stereo placement decisions resulting in mixes that sounds like this. It's stereo, Jim, but not as we know or indeed want it.

Panning everything hard might have been acceptable for filthy '60s hippies, but filthy modern-day hippies demand more solid mixes. If you simply must have that ultra-wide stereo image, why not brush up on mid-side mixing technique to get a big, bad contemporary sound.

Many audio reproduction setups (from small gadgets to big club systems) sum stereo signals to mono, which is fine unless you're using stereo trickery such as the Haas effect to get a bigger sound.

When summed to mono, a signal processed with such an effect will experience cancellation, reducing the volume of the sound and adding a comb filtering effect. So, an element that sounds awesomely wide on headphones might make like moombahton and all but disappear on a mono playback system.

Make sure you test your mixes in mono to make sure you've got a good balance of stereo width and mono compatibility.

Dont miss: The 10 worst things about being an electronic music producer