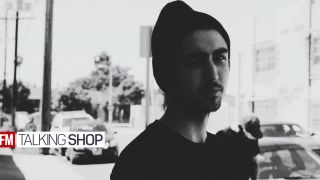 Over the course of just a handful of EPs, LA-based producer Sage Caswell has marked himself out as one of the most exciting House artists currently rising out of the US.

With his latest release, Sleep Quarters EP, out on Spring Theory this week, FM caught up with him to find more about the gear and ideas behind his tracks.

"I started working on tracks around the end of 2007. Two of my close friends (Justin Peoples and James Del Barco) were using Fruity Loops at the time, each of them taught me how to get around on it.

"I started off using VMWare Fusion on my Macbook but eventually switched over to an old Windows desktop. I remain inspired by both Jimmy and Justin, the music they make and the manner in which they carry themselves."

"The majority of my studio time has been wherever my bedroom is. Just this year I moved into a proper studio space alongside my friend Stevie (NYCPARTYINFO). I'd previously used the space and hoped that one day an opportunity to move in would present itself (which I never really thought would happen). Fortunately, things worked out, I've been here almost a year now.

"I don't use any hardware, I think the only two VSTs I have and sort of use are Sakura and Hardcore (both stock synths in Fruity Loops). I'm pretty happy with my workflow at the moment, though there's loads more I can learn and I'm open to whatever opportunities present themselves."

"I use Fruity Loops 10, any versions past that have excluded the legacy Pattern Blocks feature, which I prefer to use. This was what I first started using, prior to trying out Logic. I'm glued to the sequencer in FL, I don't understand why other DAWs haven't used this as an example in creating something that could be used universally."

"I work using a giant collection of samples, all stuff I've accumulated since high school. I have a bunch of stuff I like and use frequently, without all those I'd feel naked."

"The latest and most significant addition to the space would be the subwoofer - shocking what a difference it's made. Frequent additions to the studio come in the form of CDs or records for sampling. A few times a month I visit my parents' house and collect a batch of CDs from mine or my mom's collection."

"Mike B has a Vaporizer Rackmount that I think is pretty cool."

"I have no particular way I prefer to start making music. Sometimes I start with a kick drum and jam for a bit, other times I play around with melodies or a sample. I'm happy starting off by working on something new, the method in which stuff gets made ultimately depends on however I'm feeling that day."

"I've recently wrapped up my next two EPs, I'm not sure if they'll be out this year or next. A collection of unmixed songs from my White Light Mix will be available sometime in September through Far Away's tape series. I'm working on more stuff for Spring Theory."

Turn off your internet, or take it out entirely

"Minimize any opportunities you might have to open your browser while making music. Try your best to stay off your phone."

Be happy with your environment

"Make sure that you're comfortable with wherever it is you're working on what you're working on. If you feel uninspired by your zone, try and rearrange things. New surroundings will aid in enhancing your creative space, even if you don't believe in that kind of stuff."

Do what you feel

"Take everything anyone tells you about the creative process and tailor it to work in a way that suits you best. It's ok to take an unconventional approach to things sometimes, don't let anyone tell you that you're crazy for doing what makes you happy."