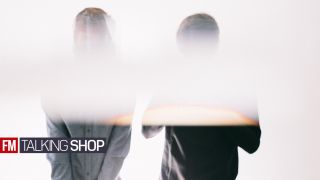 With the album out now, FM caught up with the two producers (real names Francesco Leali and Thomas Feriero) to find out how they thrive on experimentation and improvisation, and discover more about the gear behind the new LP.

Thomas: "We both started playing music in our early teens, both as drummers. Tullio de Piscopo taught us the basics of rhythm, and he is still a huge inspiration to this day, but it wasn't until a few years later that we actually began composing our own material."

Francesco: "I began writing my own rhythms by just playing my drumset all day. I think I was 14 or 15 at the time."

Thomas: "The first things I actually created were some backing beats for a friend's band. I didn't have a drum kit at the time (and no way to record one), so I did some research on Agoraphobic Nosebleed and how guitarist Scott Hull had done all the drum programming himself. I got myself a copy of Propellerhead Reason 2.0 to sequence the beats with its ReDrum and within a few hours I realised the software was a much better drummer than I would ever be."

Francesco: "We went through a million different setups including bedrooms in London, parents' basements and a terrible tiny room in Berlin before returning to Milan at the end of 2013."

Thomas: "I started working with my friend Lorenzo, a studio designer, to create a professional space as soon as we got back. We finally moved into it earlier this year, and I haven't been happier: it sounds amazing and we can finally connect everything we own at once, without having to worry about re-patching everything every other minute or moving synths around."

Francesco: "In terms of actual setup we use a mixture of hardware and software. We love the hands-on approach of physical gear, but we've never excluded plug-ins and DAWs from our environment."

Thomas: "It just wouldn't make sense for us. Plug-ins nowadays sound just as good (if not better) then their hardware equivalents and are very convenient for a lot of things. In terms of just fun and inspiration, however, using your mouse still can't compare to twisting knobs or patching modules."

Francesco: "We mostly use Logic in the studio, while Ableton Live runs the backbone of our live set. We also mess around in Reaper occasionally, but always go back to Logic before mixing. It's not necessarily because we prefer it over other DAWs, but we've been using it since version 6 which means we know it inside-out."

Thomas: "This is a tough one. The Nord Lead family have always been my go-to synths due to their simplicity and flexibility, although I've been growing tired of them lately. I'd say the truly essential "part" is the studio itself: the new room and the way it sounds have spoiled me."

Francesco: "I have always stated that my favourite instrument is the Rhodes Eighty-Eight Mark II we have in the studio but don't really deem it a necessity. In this case I'd have to go for the Dave Smith Tempest. It's versatility make it my go-to instrument when it comes to grooves, which in CW/A's case is pretty determining."

Thomas: "Our friend Clay just gave us this amazing reel-to-reel deck, an Akai GX-220. It's not exactly the most pro machine out there but it works wonders for our needs."

Francesco: "My dad's Petrof grand piano. I've been wanting to steal it from him for a while."

Thomas: "Or an SSL 4000 G-series. We don't really have the space for either but one can dream…"

Thomas: "Drums are where we come from, so when we first started we'd always begin with some kind of groove. We don't really follow this approach anymore though - I know a lot of people swear by their strict methods we try to keep things exciting by trying different things, even if it sometimes means failing miserably.

"With the CW/A album, we forced ourselves to use different approaches and this really helped develop a wider palette. Some things were improvisations from our live sets, some were born as hardware jams in my old bedroom and others were more sample-based things we individually started on our own at home. It doesn't really matter what we start with, as long as the idea is solid."

Francesco: "Our album was just released so we're going to focus on our live set and our label Parachute, right now. The CW/A live set is an ongoing, never-ending project and we're constantly adding new ideas in."

Thomas: "This doesn't mean we're not making or working on new music to release of course. We started a few other projects alongside CW/A and it seems like a lot of it will finally see the light of day soon, which is always exciting. The remix we did for Italian composer/pianist Ludovico Einaudi will be out soon, under our Lone Wolf Trait alias. We haven't really released anything with that name yet but are happy to finally have the time to develop it further."

"The only rule we have in the studio is a simple one: if we find a cool idea no-one is allowed to go home until it's done. If you're inspired you should take advantage of it and develop the idea before you lose touch with it. We know a lot of producers that work on a single track or song for weeks or even months, and can't relate to that at all. With all the stimuli we get nowadays from gigs, other music and our personal lives can you really have the same mindset a month down the line? It's also the best way to keep "training" so you're used to finishing everything. Not everything you do should be released."

"If you're uninspired, stop trying. Even if you're in the studio almost every day it doesn't mean you should be working on a track, especially if things aren't working out. When we're lacking ideas we try to leave the studio or spend time productively doing something indirectly related, such as patching new gear or just making the studio space more comfortable for the next time you're 'ready.'"

Think outside the box

"Taking risks and trying out new approaches is something we do a lot when making music. Not only does it keep things interesting for yourself but it can also deliver some positive unexpected results. Finding yourself stuck in an uncomfortable situation can lead to some pleasant discoveries."