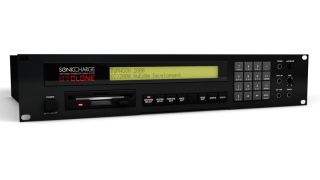 Cyclone is a defiantly old-school sampler.

Sonic Charge's Magnus Lidström actually has a long-standing relationship with the TX16W, having developed Typhoon, an alternative OS for the machine, back in the '90s. It's this software that Cyclone's based on - hence the name - with Lidström claiming that it's a "true low-level hardware emulator".

Expanding on this, Lidström says that Cyclone "simulates all the important circuits of the Yamaha TX16W, including the main 68000 CPU, the proprietary Yamaha DSP circuits, the 12-bit sample memory and the 400kHz non-linear DACs. Cyclone not only looks like a real TX16W, it sounds like a real TX16W and it runs the exact same software as a real TX16W."

You can download Cyclone for PC and Mac (VST/AU) from the Sonic Charge website. If you've been bred on super-charged software samplers then its workflow and feature set may seem a little primitive, but the Cyclone FAQ should help to bring you up to speed.