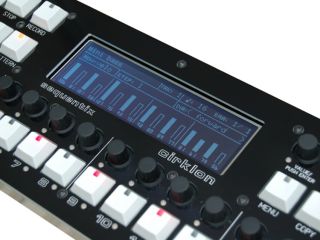 Say the word 'sequencer' to the majority of musicians these days and they're likely to think only of computer-based software. However, hardware sequencers are still being made and used, and Sequentix has just announced a new one in the shape of Cirklon.

Based on the same software as its previous P3, this is said to offer improved usability and internal operation. There's a 240 x 64 pixel LED display, 19 rotary encoders with push-swtiches, two assignable knobs, 35 high-quality Cherry keys with integrated LEDs and an additional 35 tri-colour status LEDs.

Cirklon lets you work with 16 tracks, and there are five independent MIDI Ins and Outs that you can use to connect up your gear. Other connections include USB MIDI, CV and gate outputs and a DIN sync output.

Patterns can be stored on the 2MB of internal RAM and 512MB internal NAND flash, while backups can be made using SD/MMC cards.

Sequentix says that there's still a bit of work to be done on the Cirklon's enclosure, but that it hopes to have it shipping in March for less than £1000. For now, you can check out this video of it in action.