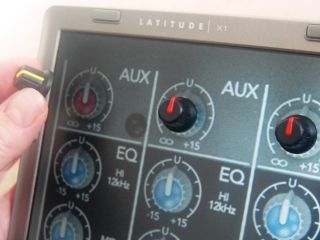 Software has enabled musicians to put a studio's worth of gear into a laptop, but sadly, it doesn't give us physical controls that we can touch and turn. However, a solution could be on the way: SenseSurface is billed as a 'three-dimensional control surface' and, somewhat remarkably, enables you to stick real knobs onto your PC laptop's screen.

Currently being developed as a prototype, SenseSurface is powered by an X/Y matrix that clips onto the back of your laptop's display. This detects the positions of the magnetic controls that can be attached to the front of the display - these sit right on top of the software parameters that you want to adjust.

A YouTube video of the SenseSurface in action proves that it really does work, and its creator, Lyndsay Williams, says that as well as knobs, it also supports sliders and switches. You can use as many controls as will fit on your screen.

SenseSurface connects via USB, so should be compatible with pretty much any PC laptop. It certainly looks interesting, but whether it has the potential to rival external hardware MIDI controllers is debatable. There are some obvious usability issues - what happens when you switch to a different screen/instrument or want to close your laptop, for example? - but MusicRadar would still like to try a production version.