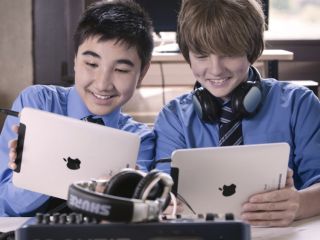 The iPad generation's Lennon and McCartney?

Back in our day, music technology at school consisted of fighting the other students for the home keyboard that had a single-finger chord button. Things have changed, though, as this video from Store Van Music demonstrates.

It's the brainchild of Neil Johnston who, as well as writing music for the pro industry, also spends a large amount of his time working in schools and teaching children the joys of music technology.

In this case, he set up a 24-piece iPad performance - all the music was composed and performed on Apple's tablet using GarageBand and a few other apps. There are, of course, other elements involved - guitars, drums, mics, MIDI controllers etc - but it seems that these were all hooked up to an iPad.

All in all, we think it's a pretty impressive result. It's sort of like a very British version of Glee: no one's dancing and most people are sitting down.