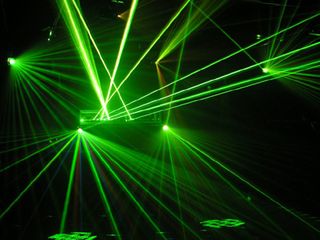 It seems that laser shows can be dangerous.

Laser light shows are pretty much de rigueur at big electronic music events these days, but their potential to do harm was brought into stark focus at the weekend when dozens of people suffered 'laser blindness' at an outdoor rave near Moscow.

New Scientist reports that 12 cases of the condition were recorded at Moscow's Central Ophthalmological Clinic, while 17 other people were treated at another hospital in the centre of the city.

Experts believe that the ravers suffered retinal burns, with Russian newspaper Kommersant quoting one ophthalmologist as saying that "Loss of vision in individual cases is as high as 80%, and regaining it is already impossible".

Partygoers started seeking medical attention several days after the show, complaining that they were suffering eye and vision problems. It's being speculated that the damage was caused when outdoor lasers that were designed to be pointed at the sky were directed at the crowd or reflected onto them.