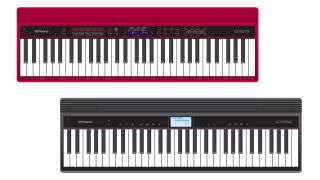 Launched at the turn of the year, Roland has now released its beginner-friendly G0-61K GO:KEYS and GO-61P GO:PIANO keyboards.

Both instruments can be powered with batteries and have built-in speakers, and are designed for those who are taking their first steps into the world of keyboard playing. In fact, the GO:KEYS can be used by pretty much anyone, as a single key press can generate a musical pattern using the instrument of your choice (more than 500 come included). Sounds and genres can be selected from the touch panel, and there's an XY pad for hands-on tweaking.

The GO:PIANO is more suitable for those who want to learn the piano specifically, and comes with piano, organ, string and other sounds. Again, there's a touch panel, and various practice features are also onboard.

Of course, both keyboards can also be played in standard fashion and used as controllers. There's audio/MIDI Bluetooth compatibility, meaning that you can wirelessly stream music through the built-in speakers and play along to it.