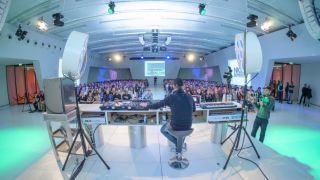 Dutch electronic music festival Dancefair is set to host the worldwide launch of Roland's hotly anticipated Aira range over the weekend of 15 and 16 February.

The festival, which takes place in the town of Utrecht, will host a large gear expo and a range of production, DJ and musical productivity seminars alongside its musical line-up, which features headline sets from Hardwell and Armin van Buuren.

The Aira range has been generating a huge among of hype and speculation since it was first announced via a series of teaser videos last month. Dancefair should offer the general public their first chance to see the new instruments in the flesh. Specific product specifications are yet to be confirmed, but the range is rumoured to include an update to Roland's classic TR-808, named the TR-08, a vocal effect unit named the VT-3 and a product linked in some way to the TR-909 drum machine.

Weekend tickets for the event start at €55. For full line-up details, more info or to book, head over to Dancefair 2014.