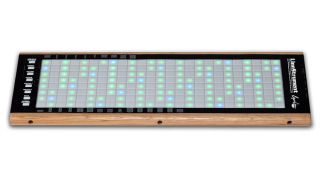 Four years after it was first previewed, LinnStrument is almost here.

It's been a while since we checked in on the progress of the LinnStrument, the next-gen controller that Roger Linn originally unveiled in prototype form in 2010, but the good news is that the iconic developer has now posted a preview of what appears to be the finished product on his website.

As planned, the LinnStrument can capture data generated by the movement of your fingers in three dimensions, giving you close control of note expression, pitch and timbre. In other words, the multitouch surface can read pressure and both left/right and forward/backward movements.

As far as layout goes, Linn says that his new instrument can be thought of as "a keyboard with its notes laid out like a guitar, violin, cello, bass or whatever you choose". Or, if you'd rather, you can consider it "a piano keyboard with the notes stretched out so the semitones have equal spacing, and with the notes rearranged into overlapping rows of two octaves each".

LinnStrument can also be used as a grid controller - a 25 x 8 matrix one, to be precise. This gives you a total of 200 touch cells to work with, each of which has an RGB LED underneath it that can assigned to one of five colours.

This is a device that's designed for both expressive playing and complex controllerism, then, and it should be available towards the end of 2014. Pricing is still to be confirmed, but expect to pay somewhere between $1000 and $2000. You can find out more on the Roger Linn Design website.