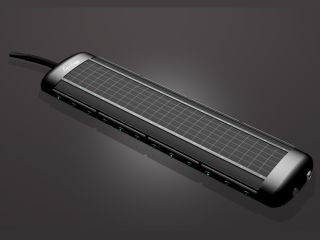 The LinnStrument may end up looking something like this. (Image credit: Roger Linn Design)

Roger Linn is a music technology legend, so when he unveils an entirely new multitouch instrument, it's worth paying attention.

You can see Roger discussing and playing the device, which is currently in prototype and may or may not be called the LinnStrument, in the video above. In his words, it's "a multitouch, pressure-sensitive, high-resolution USB touch surface from a company called TouchCo, plus a Max/MSP patch written by me and my wife Ingrid, and an OSC/TUIO driver written by a friend and fellow music/art/technology enthusiast named Tim Thompson".

Because each sensor can read x (pitch), y (timbre) and z/pressure (expression) data from your finger, you've got plenty of real-time control. What's more, the layout of the instrument's sensors should make it relatively easy to learn and play.

It should be noted, though, that isn't the final design - Roger has also published a render of what the final product might look like (click on the image above to see it in more detail) and explained its feature set.

The fly in the ointment here is that TouchCo, the company who developed the multitouch surface, was recently purchased by Amazon, and their product is no longer available. This being the case, Roger is seeking an alternative partner - which explains his decision to go public now.

You can read more about the project on the Roger Linn Design website. Here's hoping that, sooner or later, it'll become a commercial product.