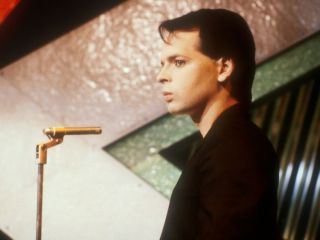 A few minutes into Synth Britannia, the new 90-minute documentary that airs for the first time on BBC Four tonight, there's a '70s clip of Keith Emerson that shows him widdling out an extravagant solo while wearing what appears to be mock chain mail suit. After about five seconds of it, you realise that this simply couldn't go on.

Mercifully, it didn't: Synth Britannia charts the rise of synth pop in Britain during the late '70s and early '80s, setting it against the backdrop of the feelings of social alienation that many of the movement's key participants and fans were experiencing at the time.

While punks wanted to rip everything up and start again, synth artists, it seems, were more concerned with reflecting on what was going on. So, lyrics that dealt with themes of isolation and despair met with sounds that seemed to have come from another planet. The work of novelist J G Ballard is frequently cited as a reference point.

Synth Britannia also confirms the importance of Kraftwerk to the British synth pop story - their influence was keenly felt by pretty much everyone involved. It's fascinating to see OMD's Andy McCluskey turn into Alan Partridge as he recalls the number of the seat he sat in when he saw the German outfit perform for the first time, referring to that day as the first of the rest of his life.

Of course, technology was also a crucial catalyst for this electronic revolution: synth manufacturers were finally starting to make instruments that aspiring musicians could afford. They still weren't cheap enough for Bernard Sumner, though, who tells the story of how he spent two months building his first synth, only to discover that it didn't really work properly.

Gary Numan is interviewed too; indeed, his performance of Are 'Friends' Electric? On Top Of The Pops in 1979 is acknowledged to be the moment that synth pop entered the mainstream.

Despite his significant success, however (he scored a number 1 with Cars), the film also reminds us of the hostile treatment that Numan received from the music press, and he tells a great story about the Musicians' Union attempting to ban him because they feared that this electronic-led approach would lead to their members losing work

In fact, the music establishment continued to have a problem with synth pop throughout the '80s, with the ill-informed accusation that it wasn't 'real music' frequently rearing its head. As Andy McCluskey points out, no synth has a 'Hit Single' button on it ("if there had been, I'd have pressed it," he says), though Pete Waterman's brief appearance towards the end of the film reminds you that, as the '80s wore on, some producers were content to stick to a successful formula rather than try to create a new one.

Synth Britannia, though, devotes the majority of its running time to synth pop's inspiring and experimental golden age, taking us though to the rise of the Pet Shop Boys, whose arrival dovetailed with the dawn of dance music.

The Pet Shop Boys - one of several 'singer + bloke at the back' synth pop duos. Image: © BBC

It's a fascinating watch that also contains its share of laugh-out-loud moments - the earnest 'revelation' from Kraftwerk's Wolfgang Flür, for example, that his band wasn't there to "arouse the girls". Elsewhere, Philip Oakey is an engaging raconteur (on the Walter/Wendy Carlos conundrum: "I never quite worked out what was going on there"), and it's surreal to see Gary Numan discussing make-up strategies with Noel Edmonds and Dave Gahan being asked by Jimmy Saville to 'fix it' for a girl by giving her a peck on the cheek.

Ultimately, though, this is a film about the music, much of which retains a charming naivety. While you get the feeling that La Roux's all-too-knowing synth pop persona could be slipped on and off as easily as a trenchcoat, you'll come away from Synth Britannia believing that not only was this a movement that had to happen, but also one that's had lasting influence.