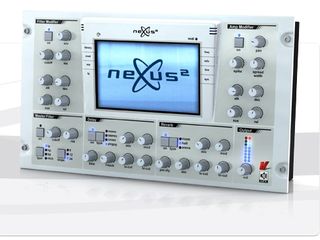 Nexus 2 should enable you to get great sounds fast.

Released early in 2007, reFX's Nexus sound module has proved popular with musicians who want a large bank of high-quality synthetic-sounding presets. Now it has a successor - Nexus 2 - that offers over 70 new features and improvements.

Perhaps the biggest news is that the new version comes with the Dance Vol. 2 Expansion as standard. This contains 128 presets and 500MB worth of samples. Also included are three additional skins - previously, you had to pay for these.

Elsewhere, you'll find new FX, a feature matrix that enables you to turn layers on and off separately and various oscillator-related enhancements. The full list of improvements can be viewed on the reFX website.

Nexus 2 is Mac- and PC-compatible and supports the VST, AU and RTAS plug-in formats. It's available now priced at $350/€300.