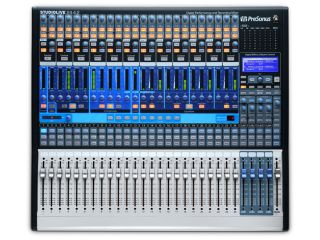 PRESS RELEASE: The PreSonus Studiolive 24:4:2digital mixer is set to make its UK debut on Saturday March 20th when it appears at a special PreSonus workshop taking place at Digital Village's East London store, with a £500 prize voucher awaiting one attendee, and a whole host of special PreSonus deals on the day.

A raft of PreSonus experts including the Vice President of Sales & Marketing Rick Naqvi, International Sales Director Mark Williams, Marketing Communications Manager Steve Oppenheimer and Product Specialist Rodney Orpheus are travelling from the PreSonus headquarters in Baton Rouge, Louisiana to Digital Village to personally introduce the 24-channel mixer, which was first announced at the 2010 NAMM show in California and is intended for use in both live performance and recording studio settings. Running from 12pm until 4pm on the Saturday afternoon, the event will include two workshops that aspiring engineers will certainly appreciate. The first is promising to teach visitors how to mix and record a live performance using the Studiolive 24:4:2, while the second will concentrate on how the new mixer integrates with PreSonus' new Studio One DAW.

The Studiolive 24:4:2was met with enthusiasm upon its launch at NAMM, following in the footsteps of its already well-established 16-channel cousin, the 16:4:2, but this time offering "third-generation mixing" according to PreSonus. The 24:4:2 boasts all the features of the 16-channel version, but in addition to the extra 8 channels it also includes a 32x26 firewire interface, a fully parametric four band EQ, 4 onboard graphic equalisers and a comprehensive gate/expander with Key Filter and Key Listen features. Like the 16:4:2, the StudioLive 24:4:2 comes complete with PreSonus' Studio One Artist DAW, Capture recording software and VSL control software which allows computer control of StudioLive's key settings.

Alongside the workshops, visitors who pre-register for the StudioLive 24:4:2's UK debut will also be entered into a prize draw to win a £500 Digital Village voucher, valid for three months, to spend on any PreSonus product.

To register for the event, customers should contact Digital Village directly at: