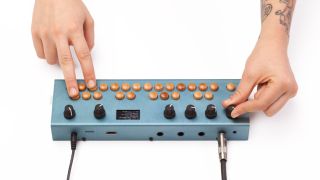 Looking like a MIDI controller but actually a self-contained computer, the Organelle is a new music-making device from Critter and Guitari.

The unit's top panel features six knobs, a 2-octave keyboard made out of round wooden buttons, and an OLED display. There's also audio I/O and a footswitch input, plus USB (for MIDI and data transfer) and an HDMI output port.

It's inside that things get really interesting, though: there's a 1GHz ARM Cortex A9 processor, while the operating system is Linux-based. This platform can run patches that turn the Organelle into any kind of instrument you like - a set of default patches is supplied, and others can be loaded via the USB port.

You can create your own patches on the device or on a computer using the Pure Data programming environment. We suspect that users will also share their patches online.

Indeed, the whole project has a community feel, with the system running open source software that can be customised at every level. Of course, there will be those who say that you'd be better off just running a laptop, but others will argue that a bespoke device such as this will aid creativity (and possibly productivity as well).

Find out more on the Critter and Guitari website, though we're still waiting for a price and release date.