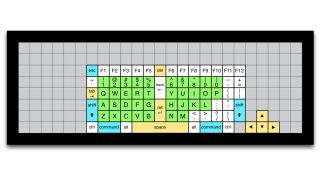 Play your synths or type an email: it's your choice.

We've seen plenty of attempts to turn the humble QWERTY keyboard into a MIDI controller, but not so many people have tried to do the opposite.

Geert Bevin has, though; LinnStrument control enables Roger Linn's LinnStrument to lead a double life as a standard QWERTY keyboard, so its users can, in theory, dispense with their dedicated typing surface.

Says Bevin: "This is a desktop tool that allows LinnStrument to control your computer. As soon as LinnStrument is set to OS Update mode, LinnStrument Control detects its presence and takes control over it. Currently it shows a typing keyboard through colored regions and allows you to type on the LinnStrument without requiring a separate keyboard. Pressing any control button on the left will exit control mode and go back to MIDI.

"This tool is very much geared to my personal usage and only works on Mac OS X though it should be easy to port to Windows. The keyboard layout is a US QWERTY keyboard that is hardcoded in the sources. If there's enough interest, other layouts can be added later."

You can watch Geert showing you how LinnStrument control works in the video above. It's open-source and available via GitHub.