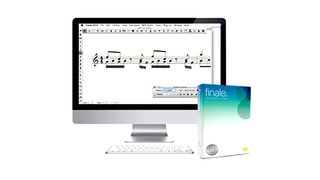 Finale: picking up the tab

MakeMusic will celebrate the 25th anniversary of their music notation software Finale with the release of Finale 2014: a radical overhaul which promises to be both future-proof and interactive.

Most notably, the changes include a newly designed tool palette and the ability for Finale users to share their files between each other, as well as with users of previous editions.

The revived Mac edition has seen a migration to the "future-proof" Cocoa interface, while MakeMusic's purchase of the Garritan virtual instruments organisation has ensured that plenty of new instrument sounds will be available in Finale 2014.

For more information or to download a free trial version, visit finalemusic.com.