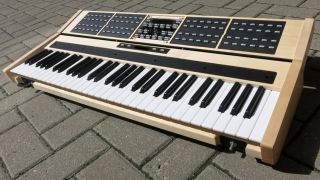 The upper section of Emphase can be detatched when you don't need it.

You probably won't know anything about Nonlinear Labs, and you might not be aware of its founder and director Stephan Schmitt, either. However, you'll almost certainly have heard of Native Instruments, the company that Schmitt founded in 1996.

Now, as part of Nonlinear Labs, Schmitt has revealed the Emphase hardware synth, a two-part prototype that comprises Performance and Creation cabinets. The Performance cabinet can operate on its own and features a 61-note Fatar keybed, two touch strips and the synth's processor and audio components, while the Creation cabinet can be slotted in the top and offers controls that are designed for "sonic exploration and sound design".

Emphase is also set to be Wi-FI enabled, meaning that you'll be able to edit it via a browser-based interface on your computer, tablet or phone. The synth's audio engine is said to be based on NI's Reaktor, a tried and tested sound generating platform.

Emphase is very much in the development phase at the moment - the name and specs are subject to change - but you can find out more about its current state on the Nonlinear Labs website.