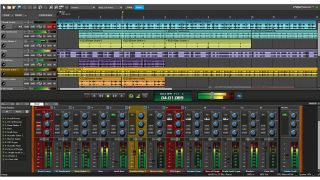 NAMM 2017: Acoustica's affordable and surprisingly powerful PC DAW has made the jump to version 8, bringing with it a raft of tempting new features and "extensive user interface improvements".

The least glamorous but perhaps biggest change has been made under the hood, with the introduction of a new audio engine, offering "increased flexibility for insert effect and send tracks", and "extensive delay compensation". Said engine has also enabled the implementation of internal sidechaining and the related Audio Control feature, "allowing audio signals to control dozens of instrument and effect parameters", as well as support for VST3 plugins.

There's more: Mixcraft 8 ushers in global automation recording, the ability to record directly to grid locations in the Performance Panel, and an improved browser with integrated access to Freesound.org. Its quirky bundle of first- and third-party instruments and effects has been bolstered, too, with the addition of G-Sonique's DTC-1 compressor, the EU PromixEQ-10A mastering EQ, Epralux's ORB7000 Octave Reverb, Kastelheimer's Veldberg XD synth and Celemony's Melodyne Essentials.