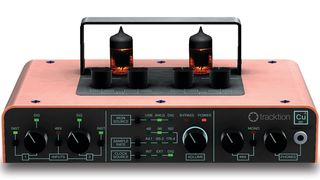 Copper Reference reckons its "something more than an interface"

NAMM 2016: It's not every day that a software developer makes a serious move into the realm of hardware, so the news that Tracktion Corporation - to date known primarily for its ace Tracktion DAW - is all set to release an audio interface comes as something of a surprise.

Described as "a true audio hot rod", the Copper Reference is a stereo unit featuring - in case you hadn't noticed - a pair of valves, intended to set it apart from the crowd by working "organic vacuum tube character" into the signal path. "Hand crafted" with a solid copper casing, it boasts "all the necessary I/O connections to integrate with any system", and although we don't know what that means specifically in terms of audio ins and outs, we are told that hook-up to the host Mac or PC is done via USB-C.

Of course, Tracktion (the company) would love you to pair its shiny new audio interface up with Tracktion (the DAW), the forthcoming v7 update to which - also revealed at NAMM 2016 - appears to be its biggest yet.

At last eschewing the rather low-budget look it's had since version 1, Tracktion 7 immediately gets off on the right foot with a classy, modern new paint job. More important than that, though, are the new functional features and technologies it's said to introduce without hindering that famously intuitive and fluid single-screen workflow. The headlines include a complete overhaul of the Racks environment; the ability to open multiple browsers at once, enabling auditioning and import of samples from several simultaneous locations; automated setup assistants and project management improvements; all-new DSP effects; and the intriguing Clip Layers (patent pending), which "allow for immersive editing right at the clip level".

Tracktion 7 and The Copper Reference are currently without specified release dates or pricing, but we'll let you know more when we do. Find out more on the Tracktion website.