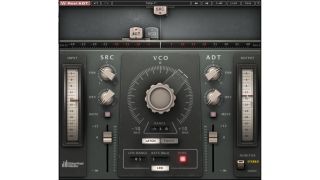 NAMM 2014: The Abbey Road name has been associated with various plugins down the years, but Waves is claiming that its new Abbey Road Reel ADT is the first one to emulate the studio's pioneering process of artificial double tracking.

The technique was famously used by The Beatles, and involved connecting the primary tape machine to a second, speed-controlled machine so that two versions of the same signal could be played back simultaneously. The frequency of an oscillator was then gently wobbled to vary the speed of the second tape machine, making it sound like a separate take.

The effect was created by Abbey Road engineer Ken Townsend, and John Lennon is said to have referred to it as "Ken's flanger".

Reel ADT promises to let you achieve the effect quickly and easily, enabling you to advance or delay the doubled signal to achieve delay and pitch variations. You can also drive each of the signals separately to add tape saturation, and there are wow and flutter controls, too.

Specs are below. Waves Abbey Road Reel ADT will be available in native formats only, but we don't yet know its price.