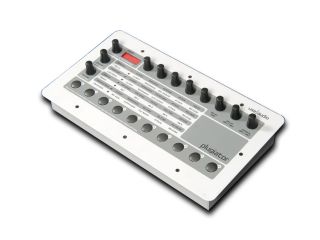 Eight knobs enable you to tweak your currently-loaded synth's parameters.

Plugiator is the first product to be released by industry newcomers Use Audio. It's a tabletop hardware synth that's capable of hosting up to eight instrument plug-ins.

To start you off, three synths come in the box: Minimax (a Minimoog emulation); LightWave (a wavetable synth); and B4000 (a Hammond B3 organ emulation). In addition, users can freely download a vocoder plug-in, the Vocodizer, once they've registered.

Four more plug-ins are available to be purchased separately: the Prodyssey (a virtual Arp Odyssey); the Pro-12 (a Prophet 5 emulation); FMagia (an FM-based synth); and Drums 'n' Bass (an electronic drum kit/bass synth).

The Plugiator can store up to 100 presets for each of its plug-ins and typical polyphony is between ten and 12 voices. It should be noted that, although eight plug-ins can be hosted, only one can be used at a time.

Thanks to the inclusion of eight knobs, you can tweak the Plugiator synths directly from the hardware (ten keys are onboard for fast recall of plug-ins/presets), though edits can also be made on your computer using the supplied software. This features graphical interfaces for all the plug-ins.

Hardware connections include a USB port, mic input (so you can use the vocoder) and a headphone output.

If you're thinking that some of the technology in Plugiator seems familiar, it's probably because, in 2007, Use Audio acquired technology rights from CreamWare, the German company that has released a wide range of DSP-based products over the past decade. The Plugiator seems to share some features with CreamWare's now discontinued Noah system, but is being offered at a much cheaper price.

For more information, go to the Use Audio website.