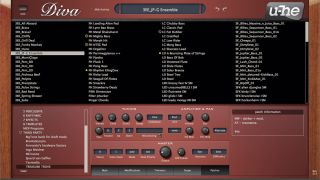 The more the merrier?

With soft synths becoming increasingly complex as developers improve their designs and base system requirements rise, many computer musicians see a hefty preset library as a major draw. But does the inclusion of a big patch library just give them an easy excuse to not learn how to program their own sounds?

We asked four virtual instrument luminaries to give us their take on the matter.

"It doesn't take much brainpower to figure that a range of good presets is important. They reflect the possibilities and sound quality of a synthesizer. They help people to make music, since not everybody has the time to make presets or the skills and talent for it. They can be a starting point for making another sound, and they can inspire someone to compose a new song.

"In the early age of synthesizers, artists like Kraftwerk, Tangerine Dream, Jean Michel Jarre and Giorgio Moroder had no presets, so they had to learn how the synthesiser worked before any music could be played! Hence the unique sounds they had.

"Anyhow, the cool thing is that music and its magic still has the last word. You can buy a guitar like Prince's, but you will never sound like Prince…"

"There's a large number of users who crave a large supply of presets. With Serum, I collected about 1000 factory presets from the sound designers, and removed about half of them for release. I knew that 1000 presets would sound more enticing than 450, but I considered Serum a 'programmer's synth' and thought that most people would make their own presets.

"I was partly wrong - many users favour presets, which I understand from a music-making angle. Fortunately, there are thousands of aftermarket presets, so there is no preset shortage."

"Although the quality is more important than the sheer number, we still try to include as many presets as possible whenever we release a new synth.

"Firstly, having a large supply of good presets ensures that our synths can be used in a wide variety of music productions from the get-go, without the customer having to learn anything new. The intricacies of sound design can be learned later on, when there's enough time.

"Secondly, great presets demonstrate the technical capabilities of the synthesizer and inspire users to create their own."

"Supplied presets should reveal the potential of the synthesiser. These are also the easy way to demonstrate the synthesiser's primary possibilities. It doesn't matter about the quantity.

"We believe that the basic approach matters: musicians and producers must not overlook every single preset. We are talking about people interested in genres, on which we are focused at this point.

"Some of the presets can bring a certain level of experience to every sound designer. An infinite amount of right combinations can create a masterpiece."