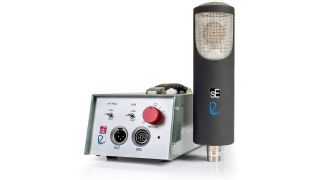 The large diaphragm mic has a huge 153dB of headroom and comes with a Class-A floor box amplifier, which has three gain settings and three high pass filter options.

Check out the full press release below for more detailed information and tech specs.

Over ten years in development, the RNT is the latest product to come from the relationship between sE Electronics and Rupert Neve Designs.

Given its substantial headroom, the mic has no need for a pad, but the amplifier circuit in the floor box has three gain settings of -12dB, 0dB (flat), and +12dB.

The amplifier circuit in the floor box is +/- 2dB from

The floor box also has a three-position high-pass filter at 40Hz, 80Hz, and 0 (off), and a nine-way selector switch to vary the polar pattern from omni to cardioid to figure-8, with several steps in between each.