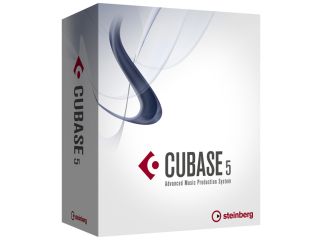 Cubase 5: now half way towards Cubase 6.

FRANKFURT MUSIKMESSE 2010 PRESS RELEASE: Steinberg is pleased to announce an upcoming free update to its award-winning Cubase 5 and Cubase Studio 5 Music Production Systems. The free update to version 5.5 adds new features and capabilities as well as a range of enhancements to existing instruments, functionality and workflow. The update will be available in Q2 2010 for all registered customers of Cubase 5 and Cubase Studio 5 at www.steinberg.net.

"We're proud to offer such a large range of improvements in a free update, it's a way for us to thank our customers for choosing Cubase," comments Helge Vogt, Steinberg's Product Marketing Manager for Cubase and the HALion product range. "The enhancements cover many areas of the application, from multi-core support and a new video engine to added automation features and updates for the onboard instruments, to name but a few. The 5.5 update underlines our vision for Cubase, that it is not just a piece of software, it's both a creative powerhouse for its users and a lifelong passion for its developers," Vogt continues.

The 5.5 update includes new enhancements for the Cubase audio engine that boosts performance in several areas, including improved resource handling for computers with multiple cores. Additionally, the included REVerence* convolution reverb and LoopMash* beat production tool have both been modified to offer better CPU efficiency, while the VST Bridge technology has also been updated to offer improved compatibility when using 32-bit VST plug-ins within a native 64-bit production environment.

Cubase 5.5 also sees a range of enhancements for both mixing and video work. Cubase users will note a new look to the Automation Panel, which also offers new automation commands such as useful new added Fill modes and improved Trim automation. The Quick Control system has now been extended to Group, FX, input and output channels, offering faster access to key parameters across a range of track classes. The new video engine offers full HD support, scalable performance and adds video playback capability via FireWire to the PC platform.

A range of new features have been included that are designed to speed up workflow and boost creativity in key areas. The MediaBay sound management system has seen an overhaul with new features such as the Memo Recorder and integrated Virtual Keyboard, while the scrubbing function has been reengineered to offer enhanced audio quality and smoothness when scrubbing through audio. The Infoline display and toolbars also see GUI improvements to aid visibility and quick editing, while the Channel Batch Export window now features added export options.

*Feature only available as part of Cubase 5.5