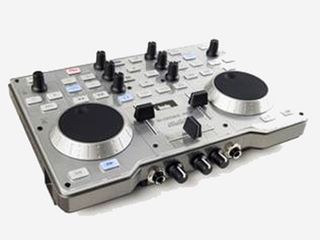 FRANKFURT MUSIKMESSE 2010 PRESS RELEASE: In mid-January at the NAMM show, Hercules offered a sneak preview of its latest DJ controller. Today, at the Musikmesse European trade fair in Frankfurt, the manufacturer is pleased to announce the release date and retail price of its new Hercules DJ Console Mk4.

Mark this down on your calendar!

This 2-deck portable DJ controller, featuring built-in audio, will be available in June 2010, at a suggested retail price of £179.99.

In addition to its 2 stereo outputs (one for mixing, the other for previewing tracks), the Hercules DJ Console Mk4 also features 2 stereo audio inputs - unique in this product category - to connect any analog audio sources. It integrates perfectly into a DJ's environment, whether he/she is just starting out or at a professional level.

With the DJ Console Mk4, DJs can:

· Switch between mixing on their computer and mixing with standard DJ decks (CD or vinyl): using DJ Console Mk4 and the included VirtualDJ® software, DJs can manipulate external audio sources just as they would with an analog mixing setup (the cross fader, volume faders and EQ knobs control mixing between the two external decks).

To check out the new Hercules DJ Console Mk4 for yourself, visit us at the Musikmesse in Frankfurt, Germany, from March 24-28, 2010, at booth C44 (Hall 5.1) - the booth for Hercules/Hyperactive, its distributor in Germany.

- The console features a compact design, powered by the USB port, and has been created for mobile DJing.

· 2 stereo outputs to play the mix on active speakers, a PA system, a hi-fi system or a mixer.

-Comes with a protective cover, a shoulder strap for easy transportation, and a sub-skin featuring a printed graphic (which can be placed underneath the rigid transparent skin installed on its top panel, to customize the console with an eye-catching design).