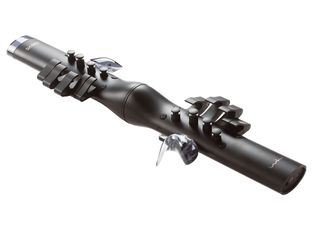 Karlax is described as a musical and visual controller.

FRANKFURT MUSIKMESSE 2010 PRESS RELEASE: DA FACT, an innovative French company specialising in the manufacture of instruments exclusively for the digital musical and visual arts, has marked its presence at the MusikMesse in Frankfurt by unveiling Karlax.

Karlax is the first controller to re-establish the artist's body at the heart of the performance. This instrument's revolutionary ergonomic design uses the artist's own natural movements. Its wireless technology (using radio-waves and MIDI protocol trough USB) gives musicians freedom on stage. Its high-resolution sensors offer a finesse of performance and open up as yet uncharted creative waters.

Karlax takes its natural place in the chain of digital creation and expression, making it possible to leverage and enhance the potential offered by every type of composition, recording, editing and performance software and hardware.

Karlax is the first musical and visual controller to be produced, the fruit of 7 years of intensive research and development. Karlax provides intense pleasure during a performance as it offers the artist a wealth of very expressive movements which can be accessed in a simple, intuitive manner. Its sensors are fitted to precision mechanics components. The innovative architecture allows pistons, keys, switches, benders, triggers, a rotation axis and an inertial unit (comprising an inclinometer, accelerometer and a 3-axis gyroscope) to be activated separately or simultaneously. An embedded screen for displaying and editing settings makes it possible to safely leave the computer off stage. With the product comes also a dedicated software compatible with both MAC and PC.

This instrument, which is totally portable and wireless, offers artists unrivalled freedom in terms of performance and expression, both in the studio and on stage. Karlax allows composers to go far beyond using the normal controls for operating and manipulating sound generators, whether in the form of hardware or software.

Karlax offers a new artistic solution to this technological challenge and fully leverages the potential of sound generators, which have been under-utilised in real time use until now.

"Karlax pushes the boundaries of language," says Nils Aziosmanoff, Chairman of LE CUBE, the leading creative centre devoted entirely to the digital arts. "The creative process is increasingly becoming an experience to savour: we are adopting an exploratory approach to creativity, instead of the previous contemplative, passive approach."

Thanks to Karlax, the first product in its professional range, DA FACT is now proving that these new instruments which are revolutionising the digital creation chain can be produced at levels matching industrial quantities and quality. Since January 2010 DA FACT has joined forces with the PARROT Group (global leader for wireless peripherals for mobile phones) to strengthen its production and commercialisation phase for Karlax.

An initial, limited numbered series has been announced for Q4, for an estimated price of 3500€ (excluding VAT)