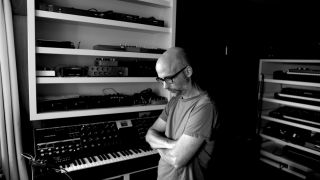 "It seemed like a really nice idea to involve other people in the making of the record," says Moby.

Moby has announced that his new album Innocents will be made available for remixing via the Blend.io platform.

Rather than just letting you download stem files, Blend.io enables you to 'pull' complete DAW project files (in this case for Ableton Live and Pro Tools) to your Dropbox folder. You can then create your remix and publish it via Blend.io. You can also listen to other published remixes and work on those.

The first track from Innocents to be made available is The Perfect Life, which features Wayne Coyne of The Flaming Lips. Visit Moby on Blend.io to get it.

Discussing his decision to 'open-up' his new album to remixers, Moby said: "I spend most of my time alone in my studio, so for Innocents it seemed like a really nice idea to involve other people in the making of the record." You listen to the record in full on Moby's Innocents website.

Earlier this year, Moby announced that he was to allow independent film makers to use his music for free in their projects.