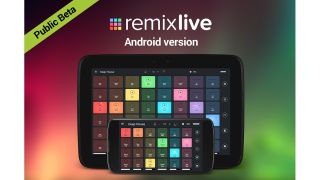 Mixvibes has announced that its Remixlive looping tool has now entered the public beta phase on Android.

Announced earlier this year, Remixlive is a grid-based remix toolbox that lets you fire off samples and edit them on-the-fly, and has an interface that's said to make it accessible to all.

As with the iOS version, all the loops, sounds and FX you trigger are kept in sync and time with each other, and you can also record/import and edit your own samples. You can load up complete packs of 48 samples (available as in-app purchases), which are then spread across the pads. Samples can be triggered individually, or you can fire off several from a column using the Multiple Mode.

On top of this, the Android version brings tap tempo and envelope editing directly on the waveform.

If you want to get involved with Remixlive then you can sign up for the public beta on Google Play. For more news and information, check out the Mixvibes website.