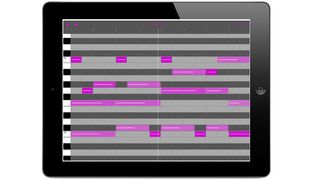 If you're in the mood for musical sketches but the idea of booting up a complex system is too heavy going, developer Nikolozi Meladze may well have come to the rescue - with the release of MIDI Editor for iPad.

Dubbed a 'Music Sketchpad', the app allows users to quickly and easily compose melodies, chord progressions and even drum patterns. It doesn't make any sound itself, but rather woks with synths and music apps that support MIDI input.

Users can simply tap on the screen to create a note and do likewise to remove it, while a handy zoom mode also allows precision editing of note lengths. It may not be the flashiest app on the market, but MIDI Editor might find a home with those in a casually experimental mood.

Click here to visit MIDI Editor on the App Store.