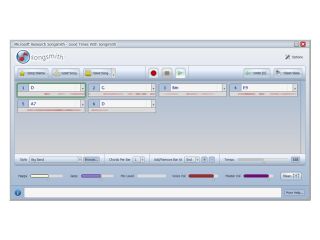 You hum it and Songsmith will back you up.

Microsoft has released Songsmith, a new piece of software that creates backing tracks based on your singing.

This is an evolution of the company's MySong technology, which we briefed you on last year.

Designed to be used by both musicians and non-musicians, Songsmith can create accompaniments in 30 different styles, and chooses chords based on the melodies that you sing.

It seems similar in concept to the Band-in-a-Box software - in fact, you can actually expand your library of styles and instruments by buying them from PG Music, that application's developer. These will also be available from Garritan.

If you're not happy with what Songsmith creates automatically, you can edit the backing track until you are.

Although this looks more like a 'fun' product than a serious songwriting tool, we think it could prove to be rather popular. As Create Digital Music points out, it'd be nice to think that fans of musical video games such as Guitar Hero might consider trying this or Apple's GarageBand '09 music lessons.

Songsmith is available now from the Microsoft website priced at $29.95. You can also download a demo version (it's PC-only at the moment).

Oh, and be sure to check out the Songsmith promo video in this week's Best Of You Tube. It's a work of cornball genius.