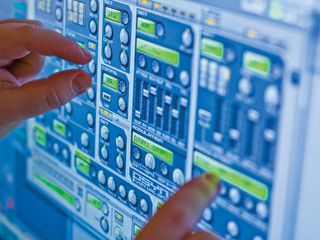 In Windows 7, you'll be able to touch your music software.

Support for multi-touch control could turn out to be one of Windows 7's most useful new features. In fact, it could change the way that you interact with your music software.

Microsoft has now expanded on its plans in this area via its Engineering Windows 7 blog. Here, it explains how it's approached the integration of multi-touch technology into the new operating system.

A post dated 25 March confirms that Windows 7 will support a number of 'gestures', including tap, double-tap, scroll, right-click, zoom and rotate. It also explains that Microsoft has been working to deliver improved high dpi support - which basically means that it'll make it easier to 'touch' smaller items.

This sounds like good news for users of music apps, which often contain tiny buttons and other controls.

Microsoft has also revealed that it's launching the Windows Touch logo program - PCs that are compatible with the new technology will bear a stamp that makes consumers aware of this.

If you want all the details, check out the Touching Windows 7 post, which also features a video demo.