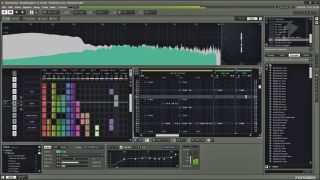 Renoise 3: the tracker to be seen with.

One of the minds behind Renoise, the king of trackers, tells us why QWERTY beats MIDI every time.

Why use a tracker? What are the advantages to the computer musician?

"To describe the tracker advantage in a few short words, I'd highlight the direct feel of writing music with a 'keyboard-driven interface'. Yes, of course you can use your hardware controller too, but personally, I look to my trusty PC keyboard - not the MIDI one - when I really need to get something done. And 'sample-mangling', of course, is a huge part of the tracker experience. Diving into those samples and really making them your own has always been my favourite part of the songwriting process.

"Renoise combines these old-school tracker virtues with a more new-school, 'modulate everything and experiment with sound' type of approach. And it's really customisable. You can make it your own by tweaking everything from the colour scheme to how the program itself works. Our community has consistently been putting out new 'Renoise tools': scripts that expand the functionality of the program in various ways."

Which feature of Renoise are you most proud of and why?

"That would be a particular feature called Autoseek. It's a feature that you can enable on a per-sample basis, which will basically match the sample playback with your song's playback position. While this might sound trivial to anyone familiar with a DAW, the difference is that you can program the sample with tracker effect commands - pitch slide, sample offset, reverse/forward playback, retrigger, etc - and still maintain accurate sync at all times. For me, this is a good example of an 'old-school-meets-new-school' paradigm.

Is track-based audio recording/editing on the cards for being added to Renoise?

"Of course, you had to ask, and I guess a lot of people would be very happy to know this. I'd love to give you an answer, but right here and now, everyone who wants to work with long recordings in Renoise can use Autoseek or Rewire (to synchronise playback position/audio with any Rewire-capable host). As for what the future holds, that's hard to say. We have a roadmap but usually plan ahead only a few steps at a time."

What can you tell us about the upcoming Redux plugin? Why not go the whole hog and make 'Renoise in a plugin'? What have you got coming up that you can tell us about?

"We realise that using Renoise as the main DAW isn't everybody's cup of tea, so creating Redux seemed like a logical step to take. Essentially, it's the instrument/sampler part of Renoise, refined into its own form. You can load Renoise instruments into Redux (and vice versa) and they are completely compatible. But it also helps us to focus development on something that is smaller and more manageable than the beast that is Renoise.

"Also, we're currently making inroads into the idea of sharing songs, instruments and presets between users by setting up a server that can host Renoise-related files free of charge. Already, a lot of people are dedicated to sharing their creations, so we're convinced this will go down well with the community."