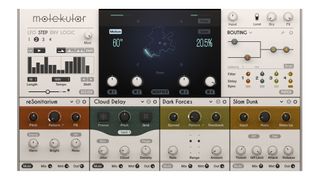 Molekular features four effects slots, each of which can house one of the system's 35 effect modules.

We chatted to him about the development process and his future plans.

How did you end up developing the new Molekular Reaktor multieffect for NI?

"My working relationship with NI goes back a long way, doing sound design work and factory content production for their products, algorithm design and full products like the Transistor Punch and Pulswerk Expansions for Maschine. Also, I've been using Reaktor since it was two products - Generator and Transformator - so doing a multieffects processor using Reaktor is the natural evolution of all that."

What are the biggest differences (and similarities) in developing for Reaktor as opposed to coding in, say, C++?

"Each environment - not just the two you mentioned - has its own particular advantages and disadvantages. Some things will be easier to do in one environment; others harder or more tedious.

"My background in using modular synthesizers since I was 15 years old makes me like Reaktor's interface paradigm, but that's a subjective thing all the way. What's definitely common to whatever environment you happen to use is that having clear specifications and maintaining a clean structure right from the start goes a long way in making a good piece of software."

Did you develop any custom modules for use in Molekular? Can Reaktor users 'pop the hood' on it and see how the whole thing works, or are some parts locked?

"Together with the Reaktor experts at NI - most notably Lazyfish and Dietrich Pank - we made literally dozens if not hundreds of new Core Cell 'types'. As far as I know, there's nothing 'locked' inside, but the structure is very complex, so 'reading' it is by no means trivial."

Which modules in Molekular were the toughest to create/design, and why? Which are you most proud of?

DG "I honestly can't tell how much effort went into which DSP algorithm, as there were so many revisions over such a long period of time. What we're probably all most proud of is the ensemble as a whole, which is far more than the sum of its parts, and which makes elaborate effects processing setups easy to create and use.

"In terms of algorithms, one of my personal favourites is Trails, which creates 'trails' of sound whenever the Play button is triggered. What it does, specifically, is grab a snippet of audio whose length is adjusted in seconds, 96th-notes or (optionally quantised) pitch values, loops that for an adjustable amount of time, applies a fade-in/-out across the entire playback duration and does 'shape modulation', which is similar to pulse width modulation for the looped grains. All while being very easy to use."

Will you be developing more Reaktor instruments/effects for NI? And what's next from your own company, Zynaptiq?

"I can't talk about unannounced products for obvious reasons, but let's say it's not looking like I will have a lot of free time over the next years, and that we have some more jaw-dropping things in the pipeline at Zynaptiq."