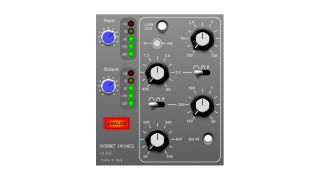 HoRNet's SW34EQ: a little slice of a console in your DAW.

We speak to Saverio Vigni, the founder of HoRNet and developer behind excellent plugins like 3Xover and AutoGain.

Tell us a bit about your company. And where did the name came from?

"My company was born in 2000. I designed and programmed websites (which I still do) and in 2011 I released my first plugin, the ChannelStrip, using all the knowledge I had gathered mixing and recording my band and other electronic projects.

"The name is just a word beginning with H! I had two bands at the time, an electronic duo called Hyphen and a rock band called Hyride, so it just felt natural to find another word starting with H for my company."

Several of your plugins are designed to help with specific problems or to improve workflow. Do you think the music software industry in general tends to overlook problem-solving tools in favour of providing more "exciting" processing/mixing tools, synths and so on?

"I think that a lot of tools sell 'the dream', giving you the impression that they will make your mix sound spectacular, but honestly, it's a mix of many little things.

"I'm a lazy person, and I like to concentrate on the artistic side of mixing, so anything that makes me mix faster and better is more than welcome. I believe the real power of digital is in doing things that were impossible or too expensive in hardware."

Your plugins are incredibly affordable. What's the thinking behind your pricing?

"Our low prices are possible thanks to the WDL library and IPlug C++ framework from Cockos, and the customisation made by Oli Larkin. Thanks to this open source effort, I simply have to concentrate on the DSP side of things.

"I also design and manage my website by myself. All of this allows us to keep the prices low. I have to admit that it's also a marketing choice to be able to penetrate a very competitive market."

What single feature are you most proud of in one of your plugins?

"It's probably one of the easiest things to make: the Automatic Gain function of the VU Meter and the TrackShaper. It took about 30 minutes to create it, but solved the very boring task of setting the initial gain of every track, so that any analogue emulation coming after it will work in a very comfortable range."

What's next from HoRNet? Will you perhaps branch out into soft synths or sampled instruments too, or are you sticking with effects?

"For the moment I'm making plugins. I'm actually modelling the EQ of the desk at Virus Studio in Siena, my home town. It's a Sound Workshop series 34 that the owner of the studio modded heavily. He asked me if it was possible to create a digital version to use in his own sessions.

"Of course, it will be released for the public too, probably in December. Then I have plans for a 'pro' version of AutoGain that will expose a lot of internal controls for those who like to tweak every aspect of a plugin.

"I also made a small monosynth for my own testing, but it's really far away from being good, so I don't think I'll release it very soon. Probably never, in fact."