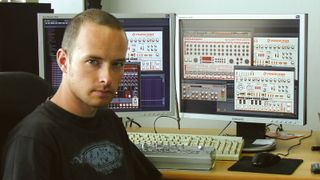 D16 Group has garnered a loyal following of fans over the years, with hit software such as its Decimort bitcrusher and LuSH-101 synth. A mixture of emulated classic music gear and new ideas - often both at the same time - makes for a diverse group of plugins, and surely a ton of headscratching in the company's Katowice office.

To find out more about the hardware emulation process, the company's biggest challenges, and what's next for D16, we spoke to co-founder, DSP coder and GUI designer Jacek Klukowski…

You're known for emulating classic instruments and effects - what's the appeal of this old gear, and how do you like to put your own stamp on it and update it?

"The centrepiece of the most of our recreations is faithful emulation of the key components of the originals, which makes the software versions sound original, authentic and genuine. However, we do our best to always enrich the user's interface and processing path with some "extras", to expand creative possibilities and make the final product something more than just ordinary emulation.

"This approach makes it possible to recreate the real spirit and preserve the sonic character of the originals (which is what part of the user community is looking for), but at the same time adding new parameters, enhancing the interface with components unavailable in the originals, or implementing things that were impossible to realise at that time when the devices were constructed. This really moves an 'idea' forward in time, to make the product fulfil all the expectations and needs the today's users would have."

What's been your most popular effects plugin, and what do you think is the reason for its popularity?

"Decimort. Undoubtedly. Its popularity is inextricably linked with few simultaneous occurrences when the Decimort was released. First, there was no competitive product at the time - there wasn't any other bitcrusher (to our knowledge) that offered the quality of resampling and signal reconstruction that Decimort does.

"Second, its sound polymorphism - Decimort is able to imitate practically every classic sampling unit, from the MPC60, EPS or FZ-1 to the retro feel of the 4-bit samples that come out from the Commodore C-64's SID sound chip. Those two facts contributed to Decimort's constantly growing userbase - mostly those who wanted a classical sampling unit in their arsenal, but couldn't get one for plenty of reasons (it's hard nowadays to find one in good shape and maintain it, they didn't want to mess with zen of their workflow and decided to stick to the software entirely, or just couldn't afford one).

"Thirdly was the evolution of music itself. There are new music genres constantly emerging, creating market demands. One day dub-step kicked in, which is rich with all kinds of sounds based on quantisation and decimation."

Your SilverLine products all have eight-letter names - any reason why?

"We wanted to have the list of project directories nicely aligned using monospaced font. And not only effects have eight-letter names - all projects are in the same directory so they should look nice, right?!

"All Silver Line products have also similar GUIs (size, design, etc), so it's look nice when they have almost the same-size product logo."

How do you get the blueprint for a device you're modelling? ie, what tests do the real units undergo? When is it that you consider an emulation to be 'finished' or 'ready'?

"The first thing to do is decompose the processing path into basic functional modules (filters, envelopes etc). We prepare emulations of these blocks separately, and if they all work with our expectations we begin the tests and start tweaking them. We usually use a set of reference sound waves to put through each and every emulated module and corresponding circuit of the original to compare the responses for such basic waveforms like sine, white noise or impulse, but also to some more complex signals. At this stage we can precisely tune up all parameters of each block in our emulation, to get the response being exactly the same in emulation and the original circuit.

"Usually at this stage, we stop measuring when the results become satisfactory. However, reality shows that even when a product is almost complete, we can always find something to improve in the emulation itself, and when you go deeper and deeper, you start to hear more and more - this is really a dead-end, and you must say stop at some point, otherwise no products would see daylight."

What's been the most challenging feature to implement in a D16 plugin? Any hardware qualities that were especially tough to recreate, or perhaps an interface design that took a lot of work? Let us know!

"One thing would be the hard sync option in LuSH-101. It's a very complicated algorithm, which behaves like an analogue oscillator for all, even most extreme settings and doesn't produce any unwanted artifacts or discontinuities in the signal. Developing this technique took us lot of time and energy.

"The second challenge of this magnitude we could think of would definitely be the hi-hat and cymbal generation in Nepheton. It was almost impossible to get it right in the digital domain, but we think we made it. Nevertheless, we're going to improve that part of Nepheton in the upcoming Classic Boxes Collection upgrade."

"Quite soon there'll be another new SilverLine effect. Without revealing too many details, we're quite certain it'll appeal to the users concerning the creative side of this project. Also, we're almost ready to release a new product made in cooperation with CFA Sound and Resonance Sound.

"At the same time we've been constantly working on refining the framework behind all our plugins, covering better preset management, nice new GUI features, some community-based features and a lot more… meaning that almost all our products will be massively upgraded in the future."