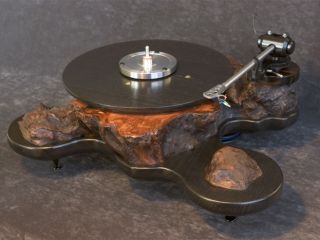 What's the stylus made of - a twig?

The turntable has undergone a bit of a transformation in recent years, with many models now featuring a USB port or iPod dock. However, the big difference with carpenter Joel Schilley's decks is that they're all made out of wood.

Describing himself as "America's premier builder of burlwood turntables" (we do wonder how much competition there is for that title), Schilley operates out of the San Francisco Bay Area.

He says that most of the Audiowood turntables, as they're known, are his designs, though he also enjoys "working with clients who have their own visions".

A glance at the gallery on his website reveals some unusual products - take the Big Red, for example, which looks like the kind of thing that Gandalf would spin vinyl on.

Then there's Barky, which appears to have more grooves on it than the records it plays.