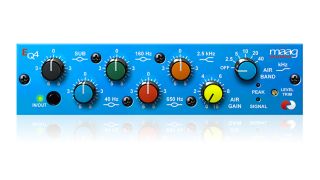 The Maag EQ4: if it's good enough for Madonna etc.

The Maag EQ4 plugin has this week become available for use with UAD-2 DSP Accelerator hardware and Apollo audio interfaces.

Already available as a VST plugin for Mac/PC, it's based on Cliff Maag's long-discontinued 1980s EQ interface, the NTI EQ3.

The six-band equaliser replicates that hardware's famed 'Air Band' control, acknowledged as a major component of the vocal mix chain on Madonna's Ray of Light and Celine Dion's Taking Chances.

The EQ4 was designed by Cliff Maag in a quest for self-proclaimed "audio perfection". In a statement, UAD said that the plugin provides "unparalleled transparency and top-end presence while maintaining a true, natural sound".

Here are the details:

Learn more about the plugin at Universal Audio.